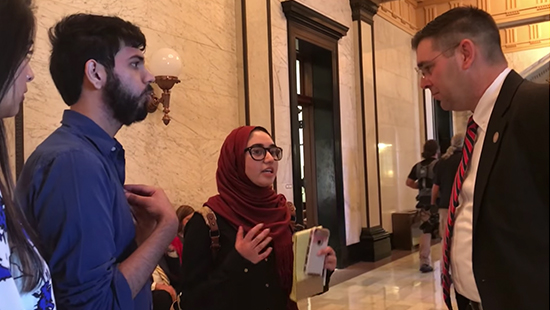 On Wednesday, January 24th 2018, MIRA members and allies traveled to the Mississippi State Capitol to engage with state legislators. We urged lawmakers to oppose all anti-immigrant proposals introduced, and to support a number of proposals that would benefit immigrants and other workers. State Representative Kathy Sykes (D, Jackson) introduced many of the legislative proposals that would benefit immigrants, migrants and workers.

People from around the state participated in the MIRA-organized day at the Capitol: a busload came up from the Gulf Coast, and many others from Scott County, the greater Jackson area, and many other areas in the state.

The event began with a news conference in the Capitol rotunda. Opened by MIRA organizer Melinda Medina, and followed by MIRA youth leader Yizel Contreras, then the youngest MIRA Board member Aemal Nafis, and leaders from labor, faith, & civil rights organizations, and others standing in solidarity with immigrants. Following the news conference, the group divided into three delegations to track down Legislators in the Capitol to speak to them about their concerns about the bad bills.

Our immigrant participants included Latinos and people from the Mid-East, Asia, and Africa. The 3 immigrant-led delegations (with interpretation services by MIRA organizers) spoke with a large number of legislators: both with Democrats who were supportive of the bills that would help immigrants and strongly opposed to the proposals that would hurt immigrants; and also with Republicans who were at least willing to listen to our concerns.

In the end, all immigrant and worker-related bills – both good and bad – were defeated in committees this year. More on the proposed legislation below.

MIRA and its coalition of allies were successful in persuading certain legislators to oppose all anti-immigrant proposals, all of which died in committees.

Most bills, both good and bad, died due to lack of action by the committees where they were referred.

A very nasty anti-Muslim house resolution, HR 1, by Rep. Andy Gipson (who early this year was appointed Mississippi Agriculture Commissioner and is no longer in the legislature), attacked the Council on Islamic American Relations (CAIR). It urged all law enforcement and government agencies to avoid contact with CAIR, a Muslim civil rights organization. This legislation died as it was not considered by the House Rules Committee. Had it passed it would not have become a “law,” but rather a set of recommended actions against Muslims. Check out this video of young immigrants speaking with Gipson about the legislation during our Civic Engagement Day.

Other anti-immigrant proposals included: efforts to enforce the so-called “Employment Protection Act” (which makes it a felony to work while unauthorized and mandates E-verify enforcement); and a proposal to end the city of Jackson’s Anti-Racial Profiling Ordinance (which protects immigrants and others from racial profiling) and to fine the city from $500 to $5,000 a day for continuing the ordinance.

Good proposals that would benefit immigrants included: reduced in-state college tuition for undocumented high school graduates; Comprehensive Workers’ Compensation Reform to help workers who are injured, and survivors of those who die at work; access to a drivers’ license; a $15.00 hourly minimum wage; and a Mississippi Civil Rights Act.