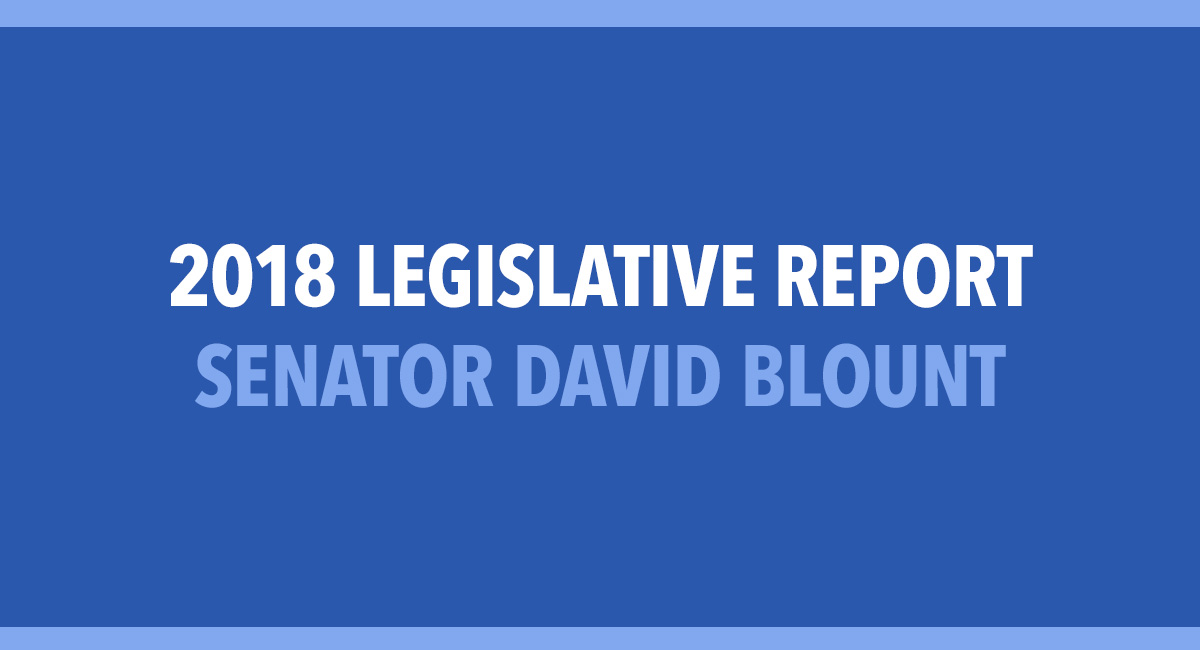 A progressive and a friend of MIRA, Sen. David Blount (D) of Jackson shared his perspective on the 2018 Mississippi Legislative Session.

With the 2018 legislative session completed, I am writing to share with you my annual recap of my work in the State Senate. The session was a lackluster affair without any notable accomplishments, as Republican legislative leaders disagreed among themselves and were unable to build bipartisan coalitions to address the challenges faced by our state.

Sometimes, the biggest success is defeating bad legislation. That was the case with the most important debate of the session: rewriting the state education funding formula for K-12 public schools. After more than a year developing a proposal in secret with almost no public input, Republican legislative leaders unveiled a bill to scrap the Mississippi Adequate Education (MAEP) formula. Developed by a New Jersey-based group, EdBuild, the new formula was filled with flaws and was never verified by the state Department of Education. It was, in many ways, a solution to a political problem. Criticized for failing to fund MAEP, leaders pushed a new formula that could be annually adjusted so that every year schools would be “fully funded.” As I was quoted in one news story, “The people have not lost faith in MAEP, they have lost faith in the Legislature.”

The bill passed the House of Representatives, setting the stage for the Senate to decide whether or not to send the bill to the Governor (who had said he would sign it into law). I argued strongly against the bill in the Senate Education Committee, but it passed. The vote the next day in the Senate was one of the most important since I have taken office. Finally, in a strong bipartisan vote, the bill was defeated 21-27. Many of us, led by Sen. Hob Bryan of Amory, worked for months to achieve this outcome. It shows there is still strong bipartisan support for public education in the Legislature.

While no funding formula is perfect, the MAEP is sound and the Legislature should fund it. Instead, Republican legislative leaders are expanding “the school recognition program.” This program takes money from MAEP, an objective fair program for all school districts, and sends extra funds to schools with high test scores in the most affluent parts of the state. Instead, I think any extra funds should be targeted to for shortages in key subjects (science and math) and in key areas where teacher recruitment is difficult. In the future, I hope we can come together and fix the small problems with MAEP and support all of our schools.

In addition to defeating the bill to replace MAEP, the Senate killed a voucher bill that would have used public funds to pay tuition at private schools. I believe public money should be used for public schools as the state constitution requires.

For the past two years I have written that that the greatest long term failure of this legislative term has been the lack of action to address our crumbling infrastructure and maintain state highways. A sound infrastructure plan should include support for city streets, that currently receive no money from the state gas tax, and county roads.

Republican Senate and House leaders offered competing plans that claimed to help but neither was meaningful, relying instead on rosy projections of budget increases. The Senate bill, in particular, was more of political talking point than a plan. Republican Transportation Commissioner Dick Hall called the Senate bill “a hoax.” Republican Speaker of the House Philip Gunn said “We did not believe the proposal presented by the Senate resulted in real dollars to the cities and counties.” In the end, no long-term plan was passed.

Republican leaders are stuck in a box: the problem requires a long-term commitment of money and a majority of their members oppose spending more money for any public purpose. All of the political grandstanding and gyrations are doomed attempts to avoid this fact. What is needed is a good old fashioned bipartisan compromise: roll back some of the recent tax cuts (which have failed to spur economic growth), commit to a responsible multi-year bond plan, and raise new revenue. This was done with the historic 1987 highway program and will only happen again when political and business leaders come together to make tough decisions.

On the budget, last year House Appropriations Chairman John Read, R-Gautier, told the House of Representatives: “I have never seen it this bad.” What passes for good news is that this year’s budget isn’t worse. Bolstered by lawsuit settlements negotiated by Attorney General Jim Hood, the budget grew by less than one percent. As a result, most agencies were level funded, with previous mid-year cuts still in place.

Thanks to reckless tax cuts passed by the Republican leadership in recent years the long-term budget situation is unlikely to improve. Looming is the biggest tax cut in state history (which I voted against). The impact on this upcoming budget is $33 million. That figure will increase to $90 million next year and, ultimately, more than $400 million every year. The total is $6.7 billion over the next twenty years. This will need to be addressed in the future.

The story for Jackson is often one step forward and one step back. I opposed efforts to move the Department of Public Safety headquarters to Rankin County. The current building, located on Woodrow Wilson off I-55, is in terrible shape and the agency needs a new facility. Most agree that the site should be converted to medical use to support the University of Mississippi Medical Center and the VA. I offered a proposal to require an open, competitive process to allow privately owned properties in Jackson to be considered. I believe there are former shopping centers and other options in Jackson that will be cheaper, centrally located, and offer the additional benefit of stabilizing the surrounding area. Unfortunately, this idea was rejected – the bond bill authorizes $3 million for a new HQ in Rankin County, where a newly constructed building will cost between $40 and $50 million.

I stood up to Republican efforts to eliminate state funding for Mississippi Public Broadcasting (MPB). The appropriation bill passed by the Legislature calls for the termination of all state funding by 2024. To be clear: eliminating state funding will kill MPB. The current budget breaks down like this: 61% state funds, 18% federal funds, 15% self-generated funds, and 6% donations. MPB is a great asset for our state and cannot survive without state support. I will work in 2019 to remove this provision.

I was disappointed that once again my proposals to expand voting in the state died. My bill would streamline the process for absentee voting by college students (my college student daughter and I worked on the bill together), allow voters to register online (and show an ID to vote as the law requires), and expand early voting. Mississippi continues to resist efforts to make it easier for all citizens to exercise their constitutional right to vote.

A few positives: The biggest success of last session was the passage of the Capitol Complex Improvement District legislation. I was one of the six negotiators on the final version and handled the bill on the Senate floor. This year, the Legislature passed a law to allow the state to borrow based on this revenue stream, thus speeding up the process of beginning work. The law directs additional state dollars from sales tax collected within Jackson to maintain infrastructure around state property (state office buildings, JSU, UMMC). This is the first time the state has acknowledged its responsibility to share in these costs on an ongoing basis. State maintenance within the district will free city funds to be spent across Jackson. Every dollar the state spends to pave streets near the Capitol means the City can spend scarce resources to pave streets inother parts of Jackson. Revenue is estimated to be $3.5 million in first year, $7 million in second year, and $11 million each year thereafter. I am very proud to have worked with the entire Jackson delegation and the Senate and House leadership to pass this important bill.

Of course, one of the great successes in recent history for both the state and Jackson are two new state museums, the Museum of Mississippi History and the Mississippi Civil Rights Museum. These two museums have garnered unanimous national acclaim and have seen visitation exceeding the most optimistic projections. Gov. Phil Bryant and legislative leadership have been consistently supportive. All of us can be proud of this accomplishment for Mississippi and the capital city.

Unlike last year, the Legislature did pass a bond bill. This year’s bill includes $82 million for universities, $25 for community colleges, and $45 maintenance of state buildings. I was disappointed that $1 million for Smith Park, a priority for Jackson, was not included. However, the bond bill commits $8.5 million to Jackson State University (to complete renovations of Stewart Hall), $12 million to the Batson Children’s Hospital at UMMC, and $50 million in one-time money for local bridges. I also joined with other Senators to support the continuation of Ayers funding for our HBCUs, including additional funding for the School of Public Health at JSU. Next year, I will be working with a bipartisan group of legislators to reform state college financial aid.

There has been bipartisan agreement to make changes in our criminal justice system. We passed a bill to do away with “debtor’s prisons” and to study sentencing disparities. I will be working in the off-season on a plan to allow a citizen who has been convicted of a crime to regain voting rights after he has fully paid his debt to society and satisfied the all conditions of his sentence. On this issue, Mississippi again has some of the most restrictive laws in the nation. I believe there is growing support to replace a lifetime ban with a fair and rational plan for restoration of suffrage for these citizens.

Recently, I was honored to be elected to the national executive committee of the National Conference of State Legislators (NCSL), the largest organization of state legislators in the country. I am the only Mississippi legislator on the committee, which is bipartisan and governs the association. I believe it is good for a small state like ours to be represented in national groups like this one and I look forward to serving.

In the past few weeks, I have met with neighborhoods and hosted town hall meetings in Byram, Terry, and across Jackson. If I can meet with your neighborhood, church, or group, please let me know.

I remain proud to represent District 29 (Hinds County) and grateful for the opportunity to work for you. If you are able to contribute to my campaign to offset the expense of letters like this one and to get ready for next year’s election, please consider donating via my website, http://www.votedavidblount.com. I am planning to run for re-election to the State Senate in 2019 and ask for your support.