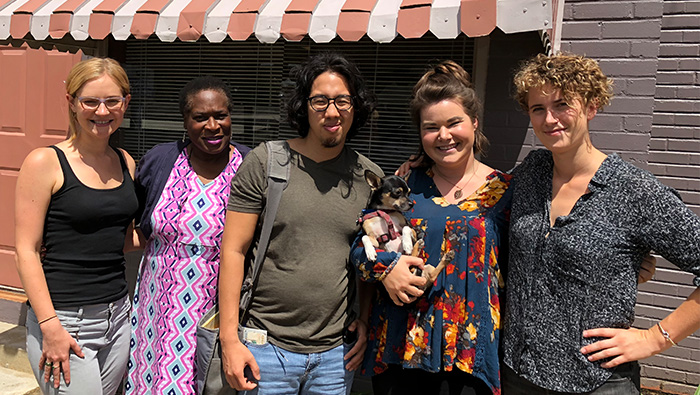 from The Jackson Advocate

When the emergency call came for attorneys to volunteer their services following the onslaught of massive arrests of unsuspecting asylum seekers along the Mexican border in late April, Mississippi Immigrants Rights Alliance (MIRA) Attorney Patricia Ice packed her bags in Jackson in anticipation of an assignment at the South Texas Family Residential Center in Dilley, South of San Antonio.

She went instead to Jena, Louisiana, whose for-profit, private prison facility – Jena / Lasalle Detention Facility – serves as a temporary holding station for about 1200 undocumented workers and asylum seekers caught up in the federal dragnet following the April 6 “Zero Tolerance” policy announced by Attorney General Jeff Sessions.

Please note: there is now a private, for-profit ICE facility in Tutweiler, MS (Tallahatchie County) that this summer began housing immigrant detainees alongside Mississippi and out-of-state inmates. The $5 billion private prison industry is nothing new, and the profits that corporations are making from immigrant detention are only growing.

Officials now estimate that some 13,000 migrant children and minors are being detained by the federal government, shuffled between shelters and massive tent cities like one in Tornillo, Texas.

Patricia Ice brings empathy as well as skill and insight gleaned from her life’s experiences to her practice of immigration law with an emphasis on family and humanitarian cases.

Throughout the summer and fall, the MIRA Legal Project has hosted Naturalization Workshops to assist eligible individuals in applying for and gaining citizenship. Above, Patricia Ice helping a client during a workshop.