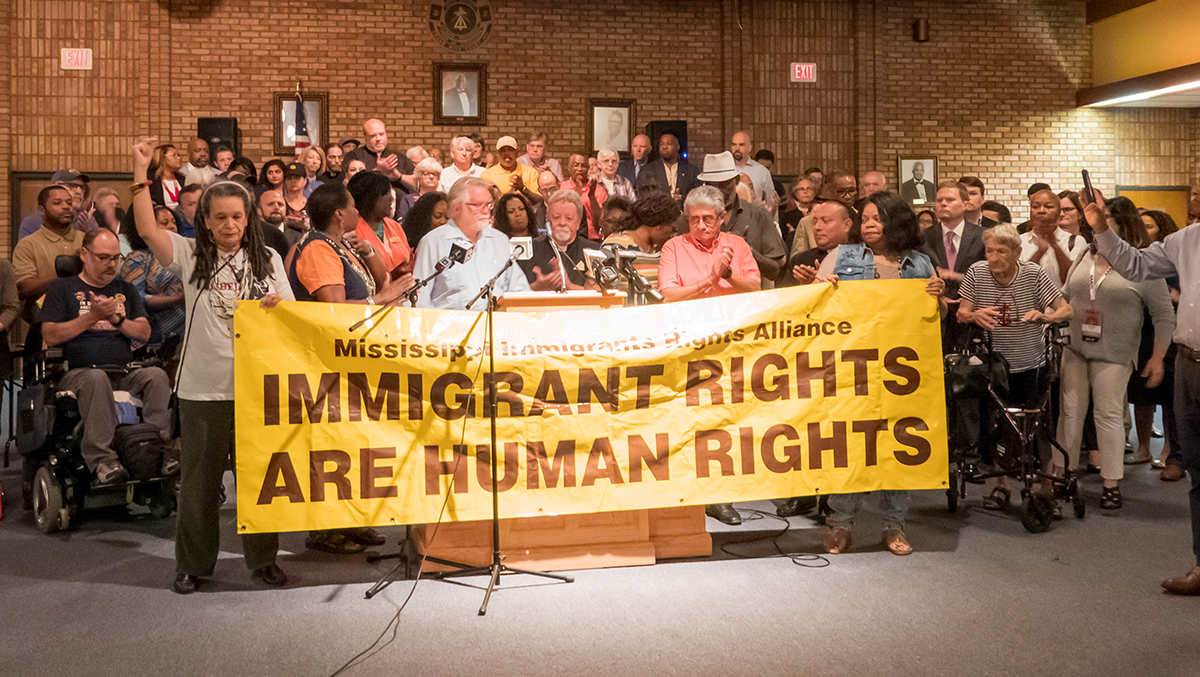 To say that this is an emergency of unprecedented proportions would be putting it lightly. Last Wednesday, August 7th, about 600 Immigration and Customs Enforcement (ICE) and Homeland Security Officers descended on Mississippi to carry out the largest single-state immigration raid in our country’s history. They swept up 680 immigrants at 7 food processing plants around the central part of the state, including Koch Foods and Pecos Foods poultry plants. Hundreds of immigrant workers were bound at the wrist with zip ties, loaded onto buses, and deposited at a central location for processing.

Many of those arrested have been moved to detention centers. But nearly 300 of those who were arrested by ICE have been released and now need major legal assistance.

The shock waves went through the state immediately. The community is terrorized. Many immigrants have gone into hiding, afraid to show up for work, afraid to take their kids to school, feeling unsafe to go to the store for food or supplies.

MIRA’s response in the field

The following day, Thursday August 8th, we held a press conference at the Mississippi NAACP headquarters in collaboration with various faith-based organizations, the United Food And Commercial Workers, the Southern Poverty Law Center, and others. The story quickly spread to many national news outlets and we’re continuing to field interviews daily.

For the workers who were detained, but then released: immediately, we began working with churches in communities where raids took place, where many of the affected workers attend services. Partnering with churches in Canton, Laurel, Forest, Carthage and Morton, MIRA helped establish legal aid centers with volunteer attorneys. Workers who were detained and released can show up at those locations to do initial intakes for legal protection, which is a critical first step in what will be a long and complex legal process.

This is the major focus of MIRA’s response: helping to organize teams of attorneys with immigration, criminal and other areas of experience to assist in hundreds of these cases. We are doing this along with the Mississippi Center for Justice, MacArthur Justice Center at the University of Mississippi Law School, Southern Poverty Law Center, ACLU-MS and a few others.

For the workers who were arrested and held: many were sent either to one of the Louisiana detention facilities or to the Adams County Correctional Facility in Natchez. MIRA Legal Project Director, Attorney  L. Patricia Ice will spend the week of August 26-30 working with detainees in Louisiana as part of a team of volunteer attorneys organized by the Southern Poverty Law Center. MIRA Organizer Luis Espinoza will also work with the team as an interpreter/translator.

Volunteer Attorneys needed! If you are a lawyer with experience in either immigration, criminal, employment or housing law, and desire to do pro bono work, please contact MIRA Legal Project Director, Attorney L Patricia Ice at p.ice@yourmira.org.

Help the families who are in crisis

As mentioned above, we’re preparing for months and even years of legal aid to defend those who were detained. These cases are incredibly complex and difficult and will require focused effort for a long time. We need your financial support to ensure that we protect as many workers (and their families) as possible. The absolute best way you can help is through financial support.