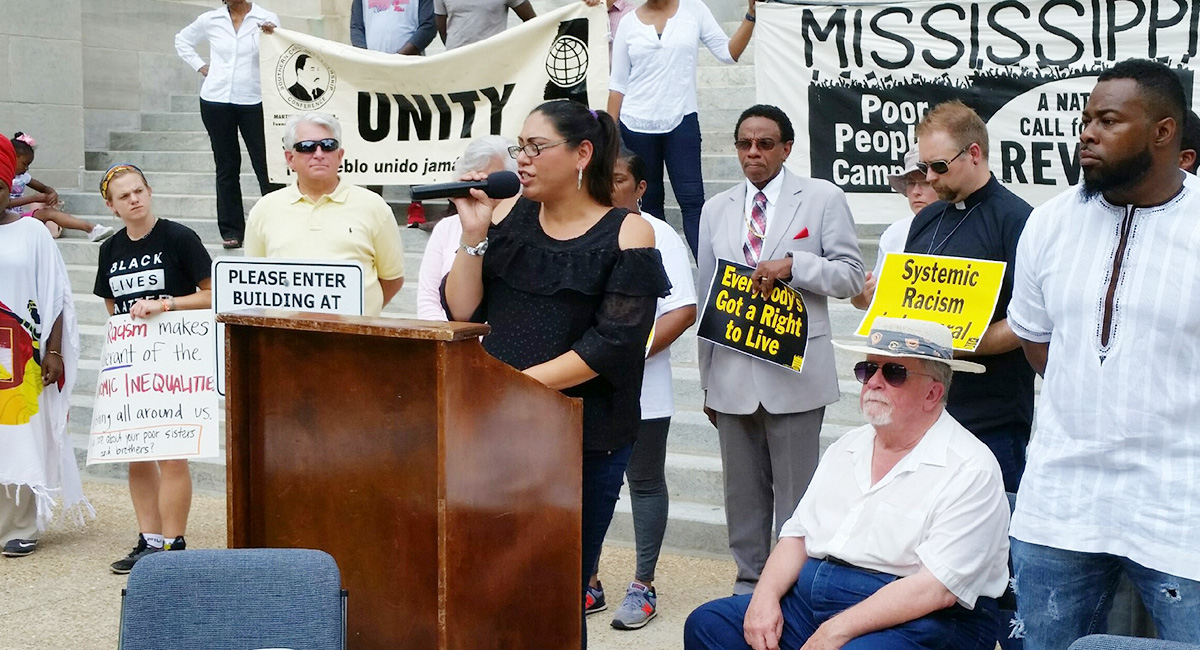 A single mother from a distant land struggles to feed her child. Where she is from there is no honorable work that she could do to help herself and her child. Born into poverty herself she fears for the life of her baby who too is now suffering from hunger and faced with the realization that organized crime awaits him as an opportunity to ingress. Her motherland is war torn between politics and organized criminals. The violence is overbearing, and it is run or stay to be killed. With her tiny baby in her arms she decides to flee for her life and her child’s life. Desiring a better future for themselves she takes the journey to the North to chase what we know as the American Dream. Not knowing what awaits her along the path she embarks without a second thought because anything is better than death.

She meets with a group of lone stragglers also chasing the dream. Each one of them hoping to make American dollars to save and eventually come back to their motherland where they have left other members of their family behind. Some left parents and others left husbands or wives and children. Each one searching for something better than that which they are leaving behind or desiring to come back one day to make it better but neither of them knows what their destiny shall be upon the journey to the North. She hears of something called la bestia, the beast. She learns that is the name of the train she must mount during her travel to get out of her country. It is called la bestia, the beast, for its ruthless taking of lives, claiming for itself the final destiny of many before their journey even begins.

As she travels she encounters hunger and thirst from the long walks through treacherous lands and with no money to feed her child she begins to ask for favors but favors come at a cost and she is challenged to forfeit her womanhood for a few morsels of food. Feeling violated she takes what they offer, and she feeds her crying child. Trapped inside of a convoy with no roof and no protection from the heat or rain she travels for hours under the sun in a squatting position. She tries to keep her baby silent as they cross the border into Mexico, where they try to avoid meeting Mexico’s own border protectors.

At one point the convoy stops, and altercation begins, and shots are fired. Many flee running for their lives and so she does the same. Now separated from the group that she is traveling with she begins to wonder a land unknown to her. Night falls and she takes refuge in a mountain. The dark night is chill, and her baby begins to cry. She has no food or water and not enough clothing to keep him warm. She cuddles with her child and begins to cry herself. What has she done? She wonders, how will they survive?

Finally, a sliver of hope as she hears someone calling out to stragglers. She walks toward the blinding light and is met with people who want to help. They take her to seek refuge in a home where she is fed and allowed to bathe. As she sleeps comfortably that night she weeps for the uncertainty of their future, but she never forgets the reasons why she’s fleeing. The helpers take her to another city where they tell her she will board a boat to cross a river to get to the other side and they make sure to tell her to seek the border agents in green uniforms.

The small boat she traveled took water in quickly she swore she and her baby would die under the strong current, but they make it. She finds a border agent and believes that they will help her, but she is met with cruelty and ridicule. They separate her from her child while the process takes place. He’s barely crying and from dehydration no tears roll down his face. While she is being processed all, she could think of was her baby. When she is finally reunited with him they are being taken to a second location. A place where no child belongs, immigrant family detention. Here she will wait months as she makes a claim for her asylum case not knowing what the future holds she clings to the hope that one day she will be released to start creating for herself what we know as the American Dream.

Every year the US deports over 300,000 people and imprisons an estimated 400,000 individuals in immigrant detention facilities across the country. Our immigration system is deeply rooted in the racial structure of society. Practices such as racial profiling subject immigrants to arrest, detention, deportation, and in effect criminalize them. Our system criminalizes immigrants seeking refuge from poverty and violence. We criminalize them for wanting to survive.

While some are released from immigrant family detention centers the fear of living in the US undocumented never leaves them. Enforcement practices produce distress and anxiety in immigrant communities, and leave them vulnerable to the racist enforcement practices of our immigration system. The fear of returning to detention or being put in detention rises in these communities. Policies and programs that exclude, detain, segregate and physically remove immigrants are products of institutionalized racism created by our country and feed racial inequality.

We must stop the detention and deportation of immigrants which tears families apart a harm all our communities. At MIRA we advocate for fair and humane immigration polices that welcome and respect the dignity of all people.